The athletic centre has recently added boxing to its roster of activities, and the greater appeal to women than men is not surprising, said fitness co-ordinator Leanne Henwood-Adam.
“Men still have the idea that fitness activities are only for women,” she said, “and they tend to stay away.”

The boxing class was added this semester to fill a need, said Henwood-Adam. The class is not designed to be for self-defence, but uses basic boxing techniques to provide a fitness-based workout that is both fun and great cardio exercise. 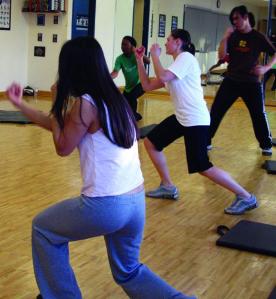 Fitness instructor Nelson Bolarinho teaches women how to use basic boxing techniques to build confidence and upper-body strength at the athletic centre. Photo by Andrea Iseman.

“Anytime a woman can feel strong and more confident about herself, she can better defend herself,” she said.

Nelson Bolarinho, a fitness trainer and the boxing instructor said a lot of women like boxing because it is as easy as exercising on a treadmill, but uses the arms and legs as well.

“I always encourage women to push themselves a little further than they think they can go,” he said, “but not to the point that you are passed out and I need to call an ambulance.”

Josey Johnson, 24, an alumnus from the registered practical nursing program, said she enjoys the class because it makes her sweat.

“I’m not good at making myself work hard,” she said. “I get more of a workout with [Nelson] than by myself.

Last Wednesday’s class had eight women and only three men, which is typical of the once-weekly class, said Bolarinho. He also said some men who do attend fitness classes think they already know everything and are not as likely to listen to instruction and get as much out of the classes as women.
“Men usually just hit the weights,” he said.

Savoy Howe, owner of the Toronto Newsgirls Boxing Club, echoes this thought and said men use their gender as an excuse for not listening, but are very naïve when it comes to boxing techniques.
“Women are like sponges and admit they know nothing,” she said. “Here we push the women as hard, if not harder, than men.”

Henwood-Adam also said the athletic centre would like to add more fitness classes, but has limited space to hold them. Women looking for more of a strength-training workout can try martial arts, which is also good for empowerment.

“To be able to learn how to do a kick, and hit a target with such powerful force, it leaves you feeling like ‘wow, you know what I’m pretty strong and I can look after myself,’” she said.

a creative professional with experience building social media presence, brand awareness and writing creative content for digital marketing campaigns. Check out my website to find my magazine and newspaper articles, copywriting and graphic design work for social media. Read more about me in the PROFILE section and fill out a CONTACT form!